If my memory is in order, we started a train tracking project with the help ofDr. Kasun De Zoysa . Certainly it is not a complete project as our final year one but it was mini project for the subject of Wireless Adhoc and Sensor Networks. We used micaz s ensor equipments and Tiny OS as our hardware and software platforms. After getting the permission from the Railway Department, we carried out our first experiment as Fort railway station and the second one at Bambalapitiya station. Our team was Chamara, Dhanuska, Girisha, and I. Girisha was not a member of our group but he helped us a lot because he is the only person who has a LapTop with a serial port. Still we haven’t come into conclusion about the results of our experiments but the experiments were funny and interesting.
Today I got a chance to go to the Dehiwala Zoo because Girisha was going to record elephants’ infrasonic sound. It is his final year project and we recorder sounds of an African elephant as well as Asian elephants. We faced some unforgettable incidents when we setting up the equipments and I was never be such close to an elephant in my life. The results of the recording are not yet released and I hope the train experiment will be a success as well as I wish Girisha good luck.
Posted by Nishantha at 10:35 AM No comments:

What happend to the STF

Sri Lanka Army is heading towards the LTTE last bastion and the remain area is almost less than 40 square kilometers for today. Although the three Special Forces regiments were kept reserved during entire wanni humanitarian operations, 2 Commando regiments are operating in the front line. 1-commando regiment is heading toward Pudumathalan via chalai with Brigadier Prasanna Silva, commander 55 division and the 2-commando regiment is reaching the east of Puthukudierippu with Brigadier Shavendra Silva, commander of 58 division. Although they were kept reserver, the SF units were called upon to action when it was tough for regular infantry units to hold the defence line as well as special operation were required deep inside the enemy territory. Day by day, we hear heroic stories of these Commando and Special Forces units and they have become the immortal in the hearts of the every peace loving citizen in Sri Lanka. I think that they deserve that honor because until today, LTTE was not able to over run any defence line held by those Commando and SF units and almost all the assaults, operations, ambushes conducted by those units were a success. But the problem is what happened to the nation's third elite unit, the Special Task Force. They were the nightmare of the LTTE decade ago and their ability was able to bring the fear to the heart of the enemy even for the heads of the LTTE. But today we are hearing the news of inability of STF and they have proven that they are not such deadly now as they were five or six years ago. Recently, a STF unit was assaulted by the LTTE while they gathered around a fire and couple of months ago, LTTE were operating 600m ahead of a STF camp in Trincomelie and those terrorist were gunned down by SF not STF. These people are the hub of VIP protection but I think that if a well planed ambush occurs for any VIP convoy, I am pretty sure that these STF people may not be able to overcome the situation.
I am not saying that these people are not talented but they did not show their colors when they get a chance to do so. Almost decade ago, we have no idea of commando and SF units but only elite units we knew was STF and I can not forget how they stopped the LTTE Rajagiriya attack. Finally we hope that the STF will keep their standards and will regain honor they lost couple of years ago
Posted by Nishantha at 12:19 PM No comments:

They came to kill them

I was shocked for the second time over yesterday’s terrorist attack on Sri Lanka cricket team because I tend to believe that the intention of terror team is not to harm players but to threaten the Pakistani government. But today morning I had a chance to read the live action as seen by Kumar Sangakkara on Cricinfo as well as on regular news papers of Sri Lanka. It is not just threatening but they have come to kill our players. The team escaped from with minimum damages just because the courage and braveness of the driver Kalil and the quick reaction to the situation of the SL team members. 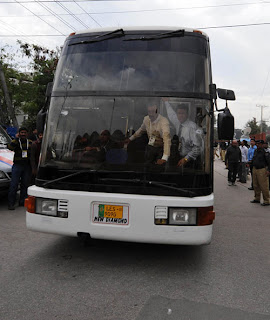 The attack started by firing a RPG to the players’bus but it missed the target and hit the electricity tower. Then the terrorists fired gunshots to the tires of the bus and next they fired to the passenger area of the bus. SL players quickly reacted to the situation by jumping over seats and laid down to the deck of the bus. They were not panicked and they shouted to the driver to continue the driving the bus forward. As Kumar’s plot, when they lay on the bus, bullets were flying over their heads and hit the seats of the bus. Kalil the driver of the bus has heard someone shouting ‘go’ ‘go’ and he lowered his body to the driver seat and accelerated the bus towards the stadium in mids of heavy gun fire. Unless that brave act of the driver as well as intelligent reaction of players, we shall not have a chance to see our beloved players alive again. The terrorist threw a grenade to the beneath of the bus but it exploded after the bus passed it. If it exploded, the bus definitely caught up in fire because of the fuel tank. Quoting about the incident, Mahela has said that the terror experience of the Sri Lanka helped them to escape from the heavy gun fire. It is possible that Ajantha Mendis led the escape because in SL Army. He has been trained to do so.In the meantime Umpire Ahsan Raza in critical condition because he was traveling by a mini bus just behind the SL team coach. 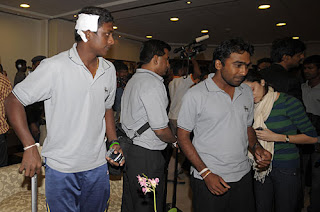 On the other hand, if the terrorist wanted to threaten the players, they do not want to come with loads of weapons and actually they don’t want 12 people. They can do it by single gun and with one person. Because SL cricket team knows to play cricket but not to fight a war. Finally according to the Mahela, they were survived by some merits they have done in past lives.

Mahela's comments
Assistance Coach on the seen
Narrow escape of Pakistan team
Dhoni commenting
Posted by Nishantha at 2:54 AM 1 comment:

Sri Lanka cricket team was attacked by the terrorists today morning when they are arriving Lahore Gadafi stadium for the third day of second test match. I was really shocked when I got the news alert from DailyMirror and even the friends who are not known as cricket fans also shocked by sudden incident. Initially we didn’t have any information about the damage caused to the team but by means of couple of minutes, we got to know that the six team members are suffering from minor injuries. Mahela, Kumar, Ajantha, Thilan, Vass and the news opening batsman paranawithana who just took his debut in this series were among the wounded. More than ten terrorists (12) have come to the attack and they have came for the liberty circle by a white van. They have brought load of weapons including rocket loungers as well as graneds. They started the action with firing rocket and exploding grandes. The tyres of the bus which carried the players were initially shot and then they started to fire to the inside of the bus. However the driver has driven the bus to the safe location mid gun firing and the players laid down in the bus to prevent from bullets. The incident caused five lives of Pakistani policeman and the Sri Lanka team was evacuated from stadium by helicopters. While I am typing this, the cricket team is on their way to the Sri Lanka and all the players are safe except minor injuries.
Although nobody have claimed the responsibility of the attack there are some obvious reasons to such attack. Sri Lanka team went to Pakistan just because the Indian cricket team refused to go there. On the otherhand Pakistan is a closer friend of Sri Lanka with respect to the military because they provide us a lot of arms as well as training. In addition groups like Al-Quida want to attack Pakistan and stop its normal day to day life because Pakistan has deals with USA the rival of Al-Quida.

Anyway our team will be safe at home by tomorrow morning and this incident again proves that the terrorism is ruthless.
Posted by Nishantha at 10:18 AM No comments: